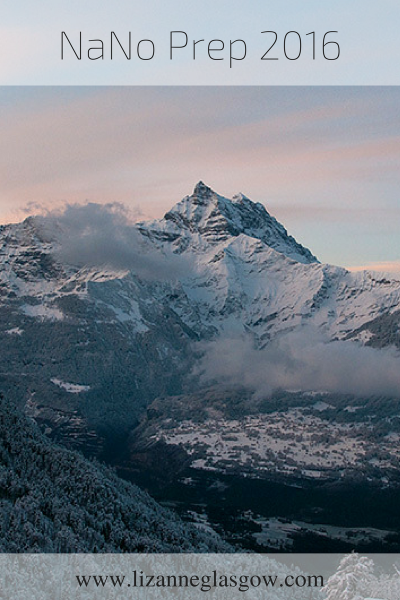 Well, here we are in the final two weeks of crunch time for NaNo Prep and NaNoWriMo! Are you ready yet? Yeah, neither am I.

I’ve been hardcore plotting and in general planning out this project (yet to be named) for the past couple of months, hence the sudden disappearance from blogging, and most social media. This particular project means more to me than anything I’ve worked on before, but I’ll leave the gushing and further information to the dedicated post at the end of the month.

I’ve wanted for a while now to do a couple of blog series; in particular, a NaNoPrep series in the weeks before NaNoWriMo. I knew a couple of topics I wanted to cover right away, and the rest came to me after some time.

Here’s a little sneak peek at what’s to come over the next several days:

And after these NaNo Prep posts, I’ll be posting my usual weekly update post, as well as some helpful writing help posts in November. Follow my blog to make sure you don’t miss anything!

Lizanne Glasgow is a writer of fantasy & YA, blogger, and avid gamer. She has been known to watch way too many shows and talk extensively about them, often overanalyzing the characters within said shows. View all posts by Lizanne Glasgow